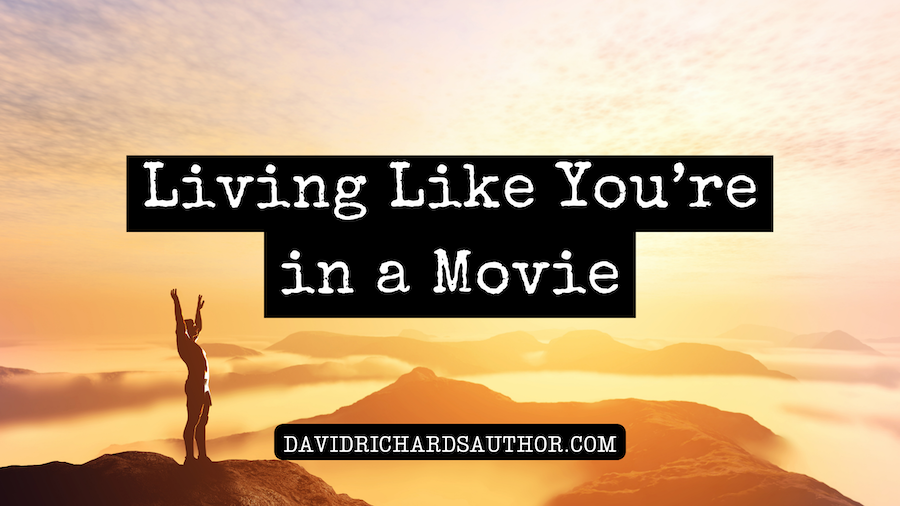 All the world’s indeed a stage

And we are merely players

Outside the gilded cage

Over the past few weeks, we’ve talked about the idea of turning your life into a movie. This week, we’re going to take it a step further and speak to the benefits of living life like you’re in a movie. To pull this all together, I’m going to draw on my fifteen years as a yoga instructor, shares insights and pearls of wisdom I’ve learned from modern sages, and explain how I’ve put this concept to work in my own life. To start with, let’s examine the practical benefits of living like you’re in a movie.

One of the more enjoyable realities that’s come out of the rise of superhero films is the “easter egg”…little nuggets of information in the form of props or hints, sprinkled throughout the movies that reference other superheroes or expand on the existing storyline.  Comic book fans have become experts at scouring the films, picking up on clues that may appear for only a few seconds, and assessing their potential impact on the universe in which the movies exist.  What immediately comes to mind is the She-Hulk miniseries now streaming on Disney from Marvel Studios.  While technically not a film, the series exists within the framework of the Marvel Cinematic Universe.  Two of the notable easter eggs found in the show were references to Wolverine and Deadpool, pillars of the Marvel universe.  For those of you tuned into all things Marvel, you know that Ryan Reynolds and Hugh Jackman will be reprising their roles as Deadpool and Wolverine, respectively, in the next Deadpool movie.

Living like you’re in a movie brings incredible focus to your life.  It demands an inventory of what is presently in your life.  Every detail matters.  The music you listen to.  The clothes you wear.  The people with whom you spend your time.  The stuff you have in your house.  Soundtrack.  Wardrobe.  Cast.  Props.  Are these things serving you, or holding you back?  What about your hobbies?  Are they helping you expand, or keeping you in your comfort zone?

The concept of focus comes back to you.  What role are you playing in life?  Are you allowing yourself to be dictated by outside forces, like the media, your peers, and other people’s opinions, or are you defining your life on your terms?  To live an extraordinary life demands focus

Why do we go to the movies?  We go to escape, to feel a sense of wonder, and be inspired.  We go to the movies to feel.  Good movies provide us with clarity early on; through the unfolding of the plot and strong storytelling, we gain a sense of where the main character wants to be.  The rest of the movie is then the journey of watching them as they try to get there.  Living like you’re in a movie provides you with clarity…where do you want to be?  If you don’t have the focus to understand where you’re going, your life isn’t going to feel compelling.  If anything, if will feel mundane, even boring.  I call that, living in the land of reruns.  Think of Bill Murray in the movie Groundhog Day where every morning he wakes up stuck in the same day, until he begins to realize the only way to make it to the next day is to totally give himself to the present one by serving others.  Living in the land of reruns is like that, minus the level of awareness displayed by Murray’s character.

Movies also teach. Who hasn’t come away from films like Saving Private Ryan or Schindler’s List without a deeper sense of appreciation for the horrors surrounding World War Two? We can watch Daniel Day Lewis’ portrayal of an American president grappling with civil war and slavery in Lincoln and come away with a greater understanding of the tension that those involved experienced, and how challenging a situation they faced.

Living your life like a movie demands you ask of yourself, how are you going to uplift the audience? In other words, what is the message of your movie, and why will people want to watch it?

I’m not sure if you’ve noticed, but actors live great lives.  They make a living by making us believe they’re someone else, and they do such with such conviction that they’re rewarded with million-dollar paydays.  Then, they vacation in summer homes across the globe, or winter in Aspen, or the Alps.  Sometimes, it feels as though they’re on a different planet from the rest of us.  But they aren’t. 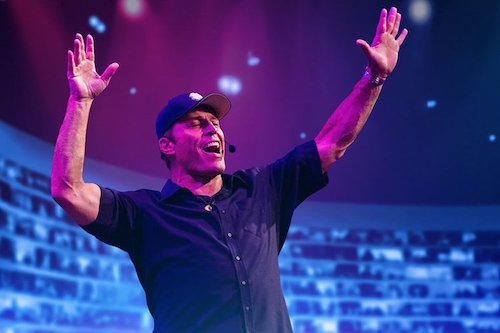 As I mentioned at the outset, I’m going to share how I’ve applied this concept to my life.  To do so, I’m going to share some pearls of wisdom I’ve heard in recent years that have dramatically shifted my thinking, and opened me up to what’s possible.  The first gem that comes to mind comes from Tony Robbins.

Life doesn’t happen to you; life happens for you.  This was a biggie.  I still remember the first time I heard him say this; I was just outside New York City.  It was July of 2017, and I was attending my first-ever Unleash the Power Within event.  There were sixteen thousand people packed into the Prudential Center in Newark, New Jersey.

I took a breath when I heard him say it.  The implications of such a statement were profound.

Up until that time, I recognized I’d been living my life like it was happening to me.  I couldn’t understand why my successes were temporary, or why happiness was fleeting.  I had been living in the land of reruns, doing the same things and expecting different results.  Then, I finally began interrupting old patterns and scripts I’d been running.

When we believe life is happening to us, the very nature of the relationship seems confrontational.  There is us, and there is life, caught up in this incessant tug of war.  Making the shift to perceiving life as happening for us changing the dynamic completely.

In the years since first hearing him say that I stopped spending so much energy trying to control the world outside of me.  Control is an illusion, and wasting energy on trying to control forces external to us is a recipe for frustration.  I started focusing on what I could control; how I responded to people and circumstances, and spent less time and energy on things outside of my control.  I began focusing on what I was bringing to the world, and less on what I was getting from it.  I began connecting to my inner strength.  So, how does this apply to the concept of living like you’re in a movie?

I believe we all yearn to be the hero or heroine in our story.  Accepting that life happens for us and not to us demands that we begin digging within to understand…what is preventing me from seeing the bigger picture?  That is our hero/heroine’s journey.  Greatness is within all of us; it’s up to us to find it.  This brings me to the next drop of wisdom; this one comes from Napoleon Hill.

Whatever your mind can conceive and believe, it can achieve. This quote can be found in Hill’s incredible book, Think and Grow Rich. To extract the meaning from this quote, we must appreciate…every human invention, every human creation, was born out of thought. From Thomas Edison’s lightbulb to Mark Zuckerberg and Facebook, these things were ideas before they ever became realities. Persistence of belief in an idea brings about the realization of that idea. 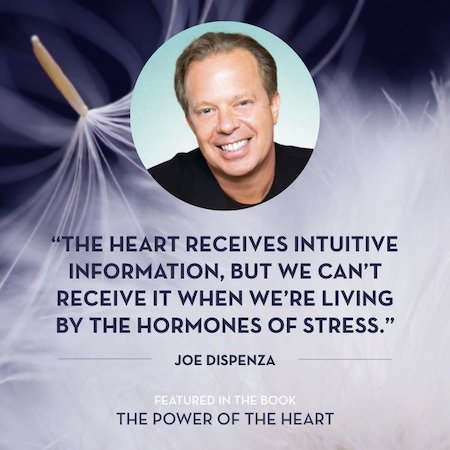 When I started work on my next book, just over three years ago, I had no idea where it was going to take me, and certainly didn’t expect to find myself writing a modern love story about two people from history who existed thousands of years ago.  On several occasions, I wanted to walk away from the story, only to find that I couldn’t.  Then, as the weeks turned into months, and the months into years, my persistence paid off.  I suddenly was able to see the story coming together.  More than that, I believed I could finish it.  I believe I have written one of the greatest love stories in human history, and I am beyond excited to share it with the world in a little over a month’s time.  That takes us to our last quote; this one comes from Dr. Joe Dispenza.

Remember Your Future.  It’s easy to remember the past.  People pride themselves on being able to recount specific events from their past, a kind of throwback to reliving the glory days.  Many people identify themselves by what they’ve experienced or, in some cases, endured from their past.  But what if you spent your time and energy remembering your future?

Dr. Dispenza operates from the perspective that we are all divine creators…if we apply this to acting, it becomes easier to understand why certain actors/actresses seem to land one blockbuster after another; they imagine themselves starring in a great movie and then make it happen.

If you took theater arts in college or were part of the drama club in high school, you may remember the phrase Deus Ex Machina…God in the Machine.  This plot device occurs during a play, tv show, or movie whenever a seemingly unsolvable problem gets resolved in an unusual way, or from an unlikely source.

When it comes to living like you’re in a movie, belief in something greater than yourself becomes essential.  There is plenty of evidence to support the idea that infinite intelligence exists if one is willing to look for it.

After clearing out the cobwebs from my past, I started putting my energy and focus into imagining what a truly beautiful life would look like, not just for me, but for everyone around me, those I care about, and those I don’t even know.  When you’re willing to learn everything you need to let go of your past, you free yourself up to remember your future.

I hope you’ve enjoyed this journey of living your life like you’re in a movie.  I am gearing up for the book launch December 8th, and will share more in the weeks ahead.

Until then, make your life an adventure!