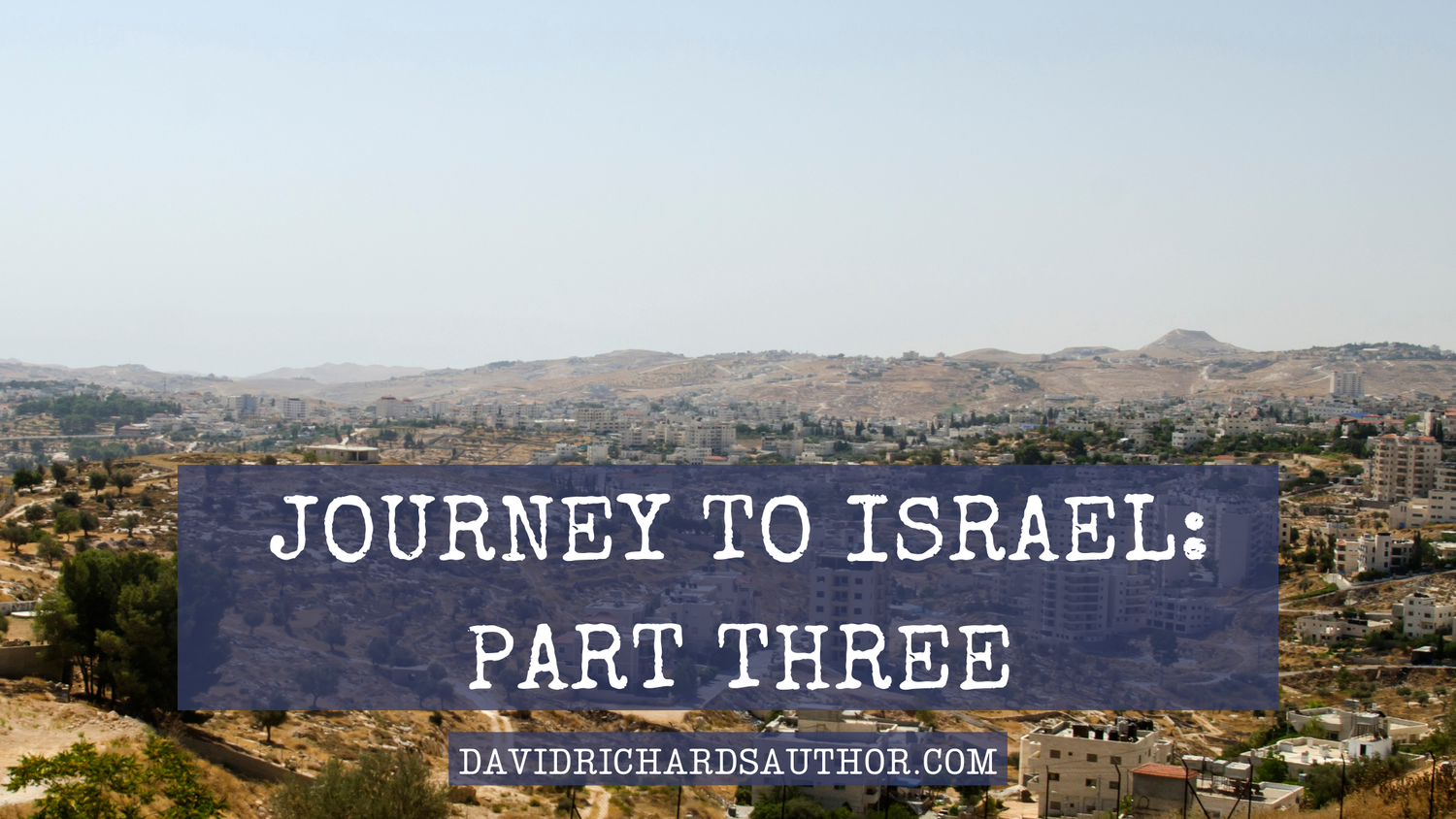 Hey everyone!  If you’ve been with me through the recent posts recapping my journey to Israel, we are on day three.  In this post, I’m also going to share an update on my book but first, let’s talk about my Wednesday in Israel.

Day three started with a bit of fun, as I rented a car and had the chance to test my driving skills in the country.  There was an Avis just a few blocks from my hotel.  My guide Tareq met me there at eight in the morning, we picked up the keys, and were off!

Our first stop was Herodium, a cone-shaped hill about eight miles south of Jerusalem, and half that distance southeast of Bethlehem.  King Herod built this fortress around 40 BC, after defeating Jews loyal to his enemy Antigonus.  Herod had a palace built within the fortress; the fortress consisted of four towers and seven stories.  Below us, several hundred meters away and on level ground, the remains of a massive bathhouse were clearly visible.

The fortress included a synagogue and theatre, and lavish living quarters for Herod and his guests. In 2010 Hebrew University professor Ehud Netzer reported he had discovered Herod’s tomb at a flattened site halfway up the hill. This was inside the hill and found amidst tunnels and water pools. Further excavations strengthened the idea that the site was in fact Herod’s mausoleum, though continued digging has called this claim into question.

You might get tired of me commenting on it, but each visit to a new site left me in awe of ancient architecture. The fortress was massive, the theatre alone could seat more than six hundred people, and the realization that they had seven story structures as far back as two thousand years ago was nothing short of incredible.

After spending about ninety minutes at the Herodium, we got back in the car and made the short trip over to Bethlehem. Bethlehem was quaint compared to Jerusalem and, as the picture show, I saw some unique takes on Starbucks. 😊

The Church of the Nativity was breathtaking; it was a beautiful, sunny day, and I was thrilled to be in the town where Jesus was born. Some of the churches we visited had numerous underground passages, and as Tareq took us through some of the back corridors, I almost felt like I was in the Tom Hanks’ movie, The Da Vinci Code. We talked casually about the Templar Knights and the Crusades.

The main floor of the church was impressive, with beautiful carvings and artwork. As we made our way downstairs, there was less light, which added a sense of reverence to where we were standing.

There were two special spots underneath the main floor of the church: the location of the manger, and the actual birthplace of Jesus. 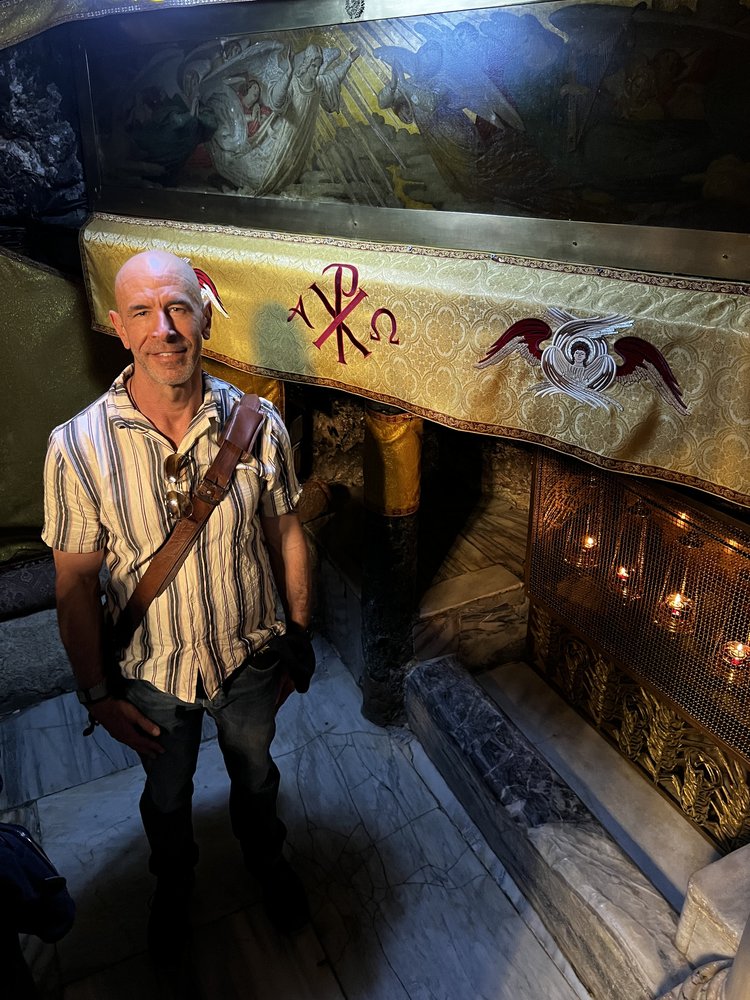 After spending the previous day in Jerusalem touring the Stations of the Cross, coming to where Jesus was born felt, well, sacred. To stand on the ground where one birth had so greatly impacted the world was so inspiring.  I could have spent hours there, taking it all in, but with the number of people wanting to stand on that same ground I was on, we stayed only a few minutes.

From there, we walked around the grounds of the church, taking it all in. We then took a short drive to the shepherd’s fields, where the angels appeared to the shepherds, announcing Jesus’ birth.

We took lunch nearby, and then made our way back to Jerusalem, where we spent several hours touring the Israel Museum. There, we saw a tablet recovered from Caesarea, another ancient city built by Herod in honor of Augustus, which bore the inscription of Pontius Pilate. We saw the Dead Sea Scrolls, and saw parts of the remains from someone unlucky enough to have been crucified; the nail was still protruding from either end of the bone.

We spent considerable time outside the museum, where there was a scale model of ancient Jerusalem; it was truly inspiring to see how vast the city was, even two thousand years ago.

We were three-quarters of the way through the museum when they announced it was time to close, so cut our visit short.

Returning to the hotel, Tareq made his way home, while I took the opportunity to rest up after the travels from the day. I wanted to be fresh as, that night, I was having dinner with Tareq and his family.

Tareq met me at dusk at the Jaffa gate, where we witnessed a large mass of Jewish faithful, shouting. There was a large presence of Israeli soldiers, and through the noise, Tareq informed me that these people wanted to march through the Muslim quarter; the police were there to stop them.

I followed Tareq into the heart of the old city, and we made our way upstairs to his home by entering one of the inconspicuous doors nestled in between some of the shops.  His home was on the top floor of a multi-family complex, and I was immediately greeted by his wife Hiba, and their two beautiful daughters, Tala and Miryam.

After brief introductions, Tareq, Tala, Miryam, and I made our way upstairs to the roof, to take in a view of the city at night.  I was struck by the fact that he lived in the heart of such a historic city; the Dome of the Rock was perhaps half a mile away, and the Church of the Holy Sepulchre was less than two hundred meters from where we stood.

While the day had been pleasant, the night was windy, and it was chilly.  We drank tea as Tareq pointed out different landmarks across the city.  His daughters were equal parts expressive and shy; I was so grateful that we had the opportunity to spend time together.  When it was time to eat, we made our way downstairs.  The food was delicious, and I was reminded of dinners at my great grandparents’ house when I was young; everything had been prepared by hand, and there was so much food, I wanted to try a little bit of everything!

After dinner Tareq and I sat and talked for a bit, and then I knew it was time to head back to the hotel and get ready for the next day, which promised even more travel, as we were heading north toward the Sea of Galilee.  I was so grateful for the kindness and compassion he showed me, inviting me into his home, and letting me share dinner with his beautiful family.  I touched based with him recently, and he shared that he and his wife are expecting.  Congratulations Tareq and Hiba! 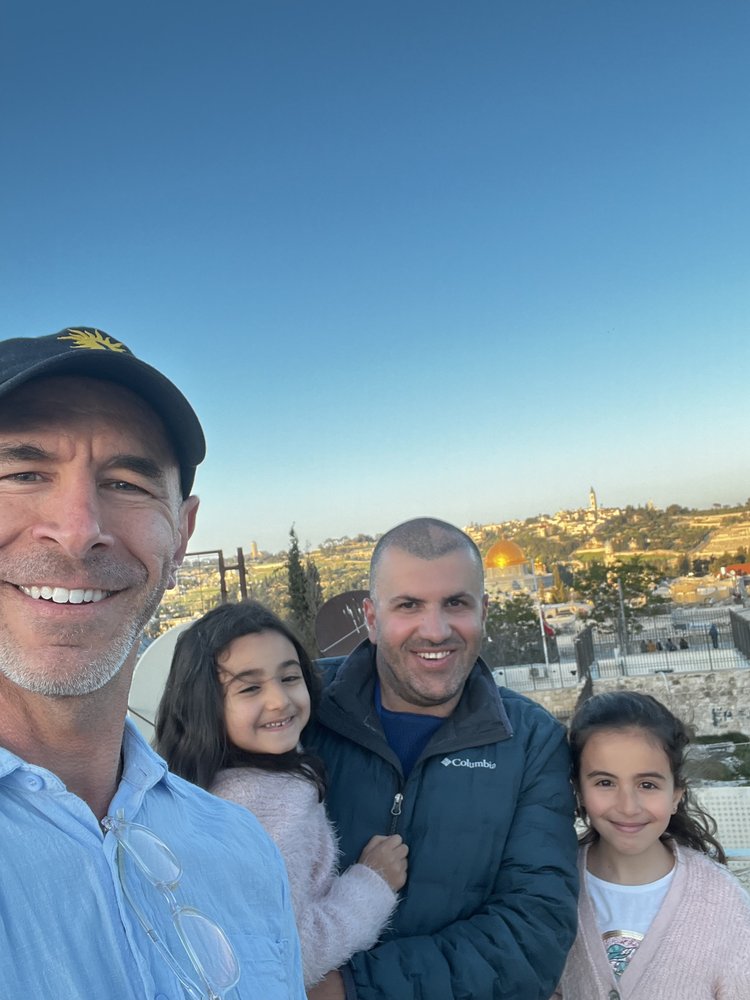 We will cover Day 4 in the next post.  To close out this one, I wanted to provide an update on the book.