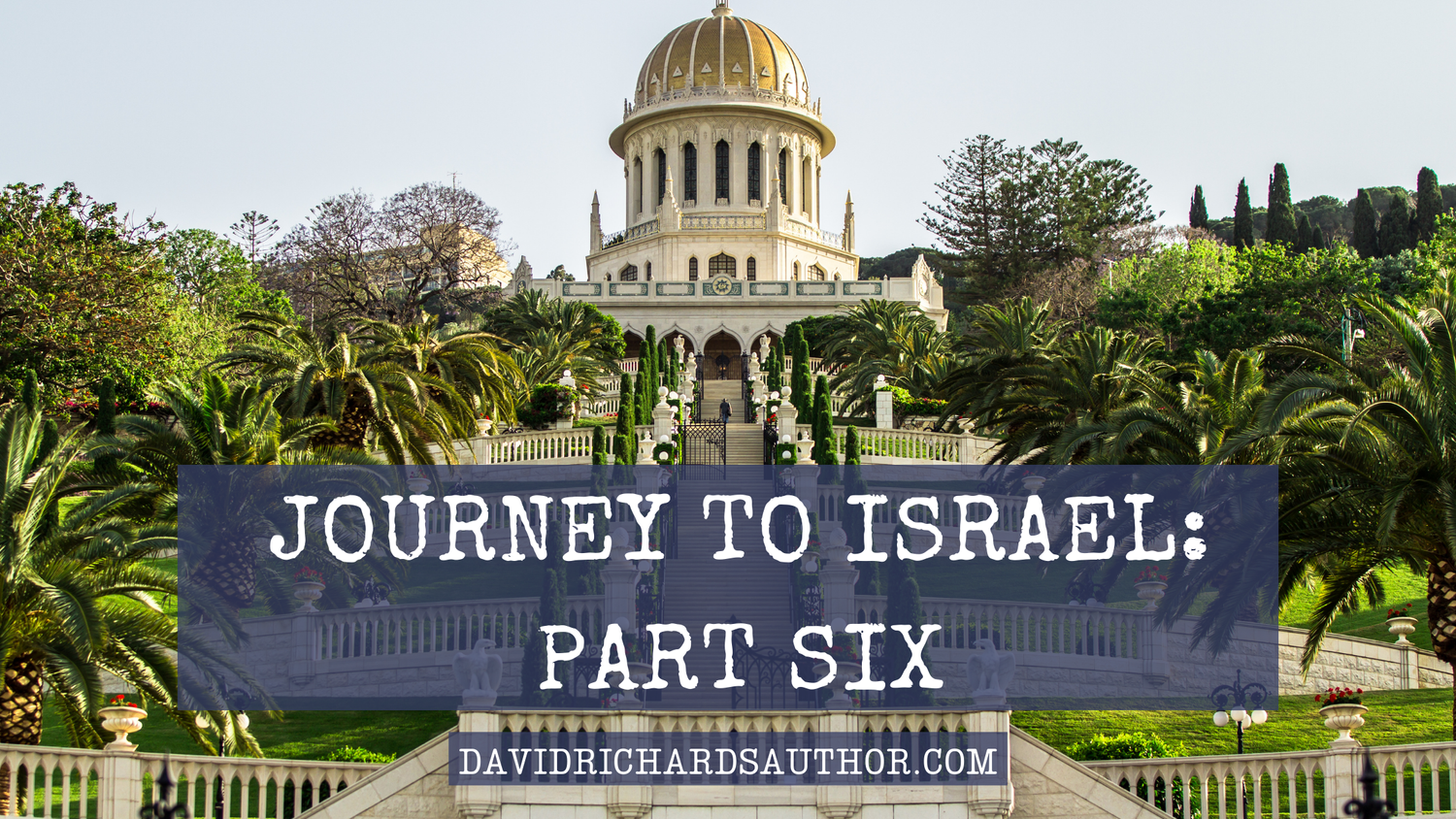 Here we are, just two days away from the Fall Equinox in the Northern Hemisphere, though you wouldn’t know it here in North Carolina, as temps have spiked back into the 90’s.

In this blog, I’ll cover day six of my trip to Israel, which was spent seeing some remarkable sites along the Mediterranean coast.  I’ll share my reflections on the trip, and then I’m going to leave you with a sneak-peek at the cover for my next book.  First, day six. 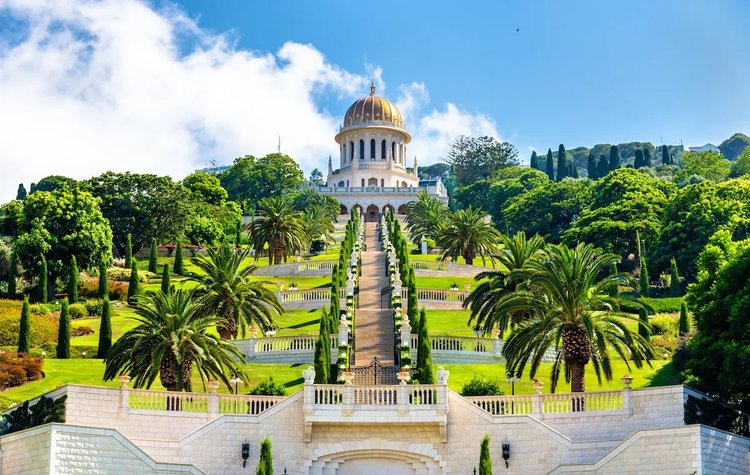 Saturday morning in Israel was bright and cloudless, and the day promised to be full of “ah”’s as we visited Haifa, then Caesarea, and finally Jaffa.  First we headed to Haifa

Haifa is a port city on the northern Israeli coast extending up the north slope of Mount Carmel.  Our time in the city would be short, as the main attraction Tareq wanted me to see was the Baha’i Gardens.

The Baha’i Gardens and Holy Places are the spiritual epicenter for Baha’i pilgrims.  The Baha’i faith is a relatively new religion which seeks to teach the essential worth of all religions and the unity of all people.  The religion was founded in the 19th Century by Bahaullah, and initially developed in Iran and parts of the Middle East.  The central tenet of this faith is that religion is revealed in an orderly and progressive way by a single God through manifestations of God throughout history, meaning that Buddha, Jesus, and Muhammad are early manifestations, and Bahaullah was the latest manifestation.

The view of the gardens was spectacular, both from the top and the bottom.  From the top, we had a chance to take in the city, and the expanse of the port.  In the Hebrew Bible, the top of Mount Carmel is known as the “Cave of Elijah” and is traditionally linked to the Prophet Elijah and his apprentice, Elisha.  During the Roman period, the city was known as a Jewish fishing village.  Under the early Muslim period, particularly in the 9th century, Haifa established trade relations with Egyptian ports, with several shipyards developed on the coast of the city.  Our visit in Haifa was brief, and before long, we were in the car and making our way to Caesarea.

Caesarea was built during the rule of Herod the Great sometime before 9 BC and would later serve as the capital of the Roman provinces of Roman Judea, Roman Syria Palaestina and Byzantine Palaestina Prima.  The city was named in honor of Caesar Augustus, and included a formidable harbor which, at the time, was determined to be the largest artificial harbor in the open sea.

The ruins themselves were massive, sprawled out over half a mile, and included the remains of two-thousand-year-old aqueducts, which brought water all the way from the Carmel range near Haifa, and an impressive hippodrome, where chariot races and gladiator games took place.  Herod had his palace built on a small promontory jutting out into the ocean and once again, I found myself slightly awestruck that I was standing on the same ground he had stood thousands of years prior.  Despite a tide that sometimes washed over the mosaic floors, the decorative style of the period was easy to see, and I could imagine what it must have been like to wake up to the sounds of waves crashing all around me.

Caesarea was first introduced to Christianity when Paul the Apostle received hospitality there, and baptized Cornelius the Centurion, marking the first time baptism was conferred on Gentiles.

It was hot.  There were no clouds in the sky and it was only the end of April.  I was grateful I hadn’t booked my trip during the summer. 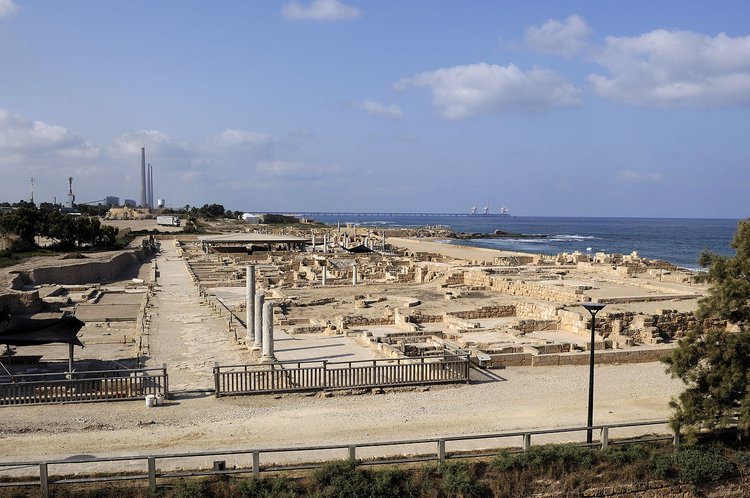 Caesarea was also one of the cities most impacted by the wars that descended on this part of the world during the advance of civilization.  The Muslims conquered the city from the Byzantines in 640 AD, and then the Crusaders took the city during the First Crusade in 1101.  Over the next few centuries, the city would swing back and forth between Crusader and Muslim control, before ultimately falling in 1265 to the Mamluk armies of the Sultan Baibars.  It was here, in listening to Tareq review the conflict that surrounded this city and the region during the first millennia that I appreciated the conviction of the people who fought here.

Granted, I had flown from the United States and not England but understand my geography enough to know that making the trek from Western Europe to Israel would have been daunting.  From Paris to Jerusalem is more than 2,100 miles; most of the crusaders walked.  That’s like walking from New York City to Salt Lake City, and doesn’t include the necessity of side trips to find food or rest.

After grabbing a bite to eat, Tareq and I returned to the car and made our way down to Jaffa.

Jaffa is a bustling coastal city, and one of the first stops we made was to Saint Peter’s Church.  St. Peter’s Church is unique, in that it is one of the few churches that faces west, towards the sea.  Tareq mentioned the reasons for this unusual orientation were twofold: 1) on top of the church’s façade is a rock brought from Caesarea, signifying that Peter was the rock on which Jesus built his church and, 2) Peter’s vision, which appeared from the sea, indicating the message of the church was to be taken to the West.

From there, we saw the Great Mosque, walked through the flea market, and visited the small mosque believed to have been the house of Simon the Tanner.  This site is important in Christian belief as it was here that Peter had the dream to start converting Roman pagans into the new beliefs, and where Christianity split away from Judaism.

Jaffa’s harbor was beautiful, lined with colorful sailboats and small ships.  Above the rocky harbor are rocky cliffs where, according to Greek legend, Andromeda, the daughter of the mythical founder of the town, was chained until being released by Perseus.  Our last stop was an Egyptian gate from the time of Ramses II; some scholars believe the Exodus took place during his reign.  As the day stretched into late afternoon, it was time for Tareq to return to Jerusalem.

I dropped him off at the local bus station and headed to the outskirts of Tel Aviv.

My trip to Israel was never meant to be a vacation; most of the days were seven or eight hours spent visiting sites, discussing history with Tareq, and absorbing what I was seeing and hearing.  I was incredibly grateful for the trip, and for all my takeaways and learnings from my time spent in this tiny country in the Middle East.

Thanks to my military upbringing and time spent on active duty, I’ve explored history for the better part of the last thirty years.  Western civilization has been shaped by conflict, from the Dark Ages to the Crusades to the multitude of regional wars leading up to the Hundred Years War.  From the War of Independence to the Civil War to two World Wars, the world has shifted and grown because of warfare, and America was the last great empire, rising out of World War Two as a symbol of hope, freedom, and prosperity for all.

Every western nation forged under the banner of Christianity brought with it a new principle of leadership.  From the empire of Rome to the kings of Europe to the presidents of the United States, each country sought to create a new kind of relationship between the governed and the governor; all this started during the time of Jesus and the rule of Augustus.

I’ve mentioned this in previous posts, and while I certainly never expected to write a love story for my next book, once this one began to take shape, I couldn’t resist.

I am beyond excited to share with you the cover for my next book, Love Letters to the Virgin Mary: The Resurrection of King David. The book will release December 8th, and will be available on Amazon and Barnes and Noble.  I expect to have pre-order information available in the coming weeks, where an e-copy of the book will be available for just ninety-nine cents.  That’s right…less than a dollar!

Stay tuned!  In the weeks ahead, I’ll be sharing more information about what went into making the book and what I learned about being a Christian by stepping outside my faith.  If you’re in the Northern Hemisphere, enjoy the start of Fall…and if you’re somewhere Down Under, welcome to Spring.  Live with Courage!