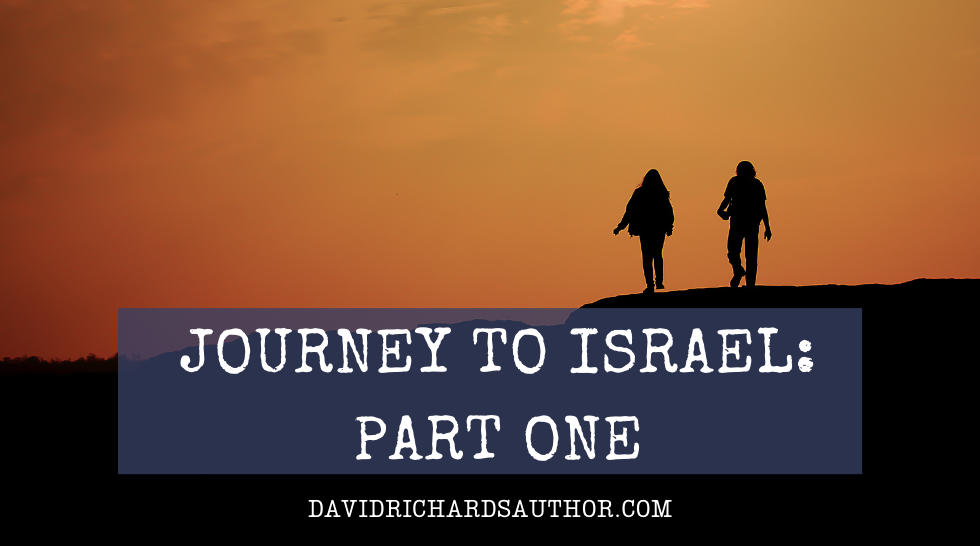 Hey everyone! I can’t believe it’s been nearly four months since my last blog. My wish for you is that, wherever you’re reading this in the world, you’re making the most of the season, be it summer or winter, and your life is an adventure.

Given it’s been several months, I’d like to spend the next few blogs sharing my experiences from my trip to Israel.  I’ll use each blog to cover a day of the trip, reviewing the highlights, some of the key takeaways, then set the stage for the next blog.  Before I get started, I’d like to give a quick shout-out to Rebekah, the incredible soul who posted all my previous blogs.

Rebekah has taken the next step in her career journey and has moved away from the virtual assistant world.  Thanks for all the amazing support Rebekah, and my best wishes for you; I know you’ll be phenomenal with whatever you set your mind to!

Okay, let’s set the stage for my trip to Israel.

Someone I worked with connected me to my guide, Tareq.  Tareq grew up in Israel, and has been a professional tour guide for the last five years.  In building our itinerary, I told him I wanted to see as many holy sites as possible, and I wanted to see some of the Ancient Roman sites as well.  After a week, he sent me a proposed itinerary and I have to say, I was blown away.  Reviewing what we were going to see in places like Jerusalem, Bethlehem, Nazareth, and Galilee, I quickly appreciated the gravity of what this trip was going to mean to me; I’d heard about these places since I was three or four years old.

My trip started out with a bit of a snag, as my flight from RDU to JFK Friday night was delayed to the point I was going to miss my connecting flight to Tel Aviv; I ended up departing on Saturday instead. To make things even more exciting, as we were coming in for our landing in JFK that Saturday night, the wing of our plane was struck by lightning. In all my travels, that was a first!

I arrived Easter Sunday in the early evening into Tel Aviv International Airport.  Interestingly, for 30 minutes prior to landing, no one is allowed out of their seats.  Tareq met me curbside, and we made our way to Jerusalem, about a forty minute drive.  By the time I got to my hotel, it was dusk.  I got checked in, threw my bags on the bed, and went for a walk to see the ancient city.  It was dark, but there was an energy to the city, as many of the markets were still open.  I grabbed a quick bite, did a little shopping, and returned to my hotel to prepare for the next day. 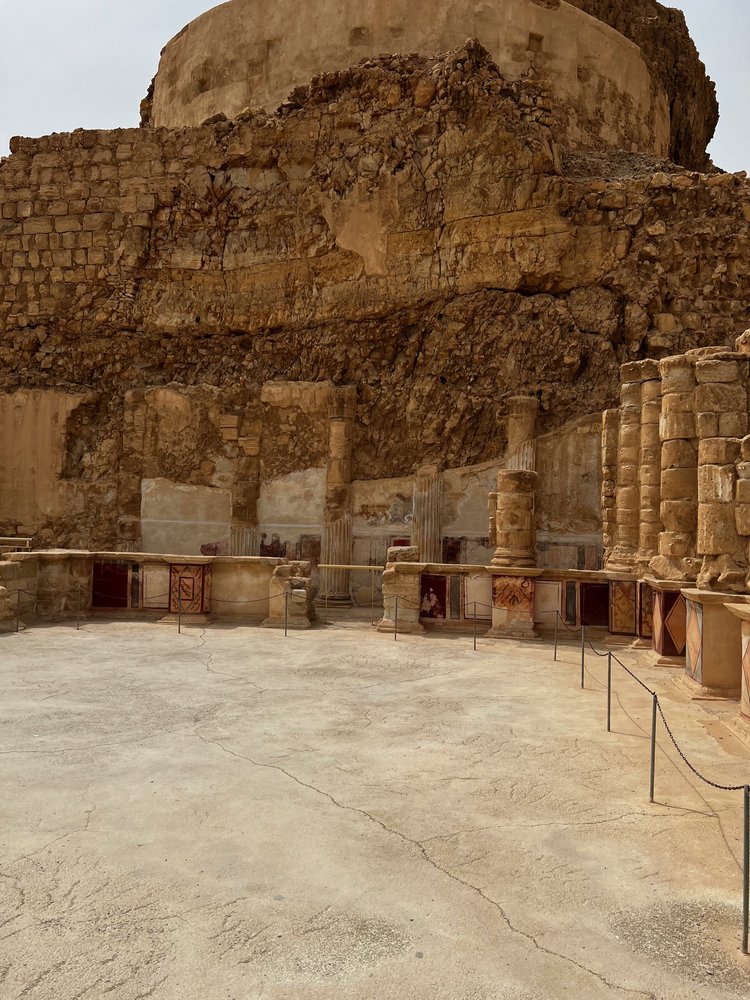 Our first stop was Masada, an ancient Jewish fortress situated on top of a mountain and overlooking the Dead Sea; it was roughly two hours from Jerusalem, and the temperature rose quickly as we moved into the arid lands in the eastern part of the country. We took a cable car to the top of the mountain; making the hourlong hike in the late April sun would have been grueling. Once on top, the view was impressive.

King Herod built this fortress around 30 B.C. When the Jewish people revolted against Roman rule in 66AD, the fortress at Masada was one of the last strongholds of Jewish resistance. From atop the mountain, as the pictures show, you can see the Roman encampments below, when they lay siege to the fortress. On the western slope of the mountain, facing opposite the Dead Sea, the Romans had built a siege ramp, which they used to bring up heavy equipment during the siege. The siege ramp still stands today and is one of the oldest still in existence.

The top of the fortress had incredible amounts of storage for food and water. Along different parts of the mountainside, I could see small canals built into the mountain which were used for the transportation of some water. Masada supported just under 1000 people, so it was by no means a small fortress.

King Herod’s palace is the northern most building on the fortress, and is built into the cliff face. I followed Tareq down a narrow band of stairs and there we were, standing in the bedroom of King Herod. 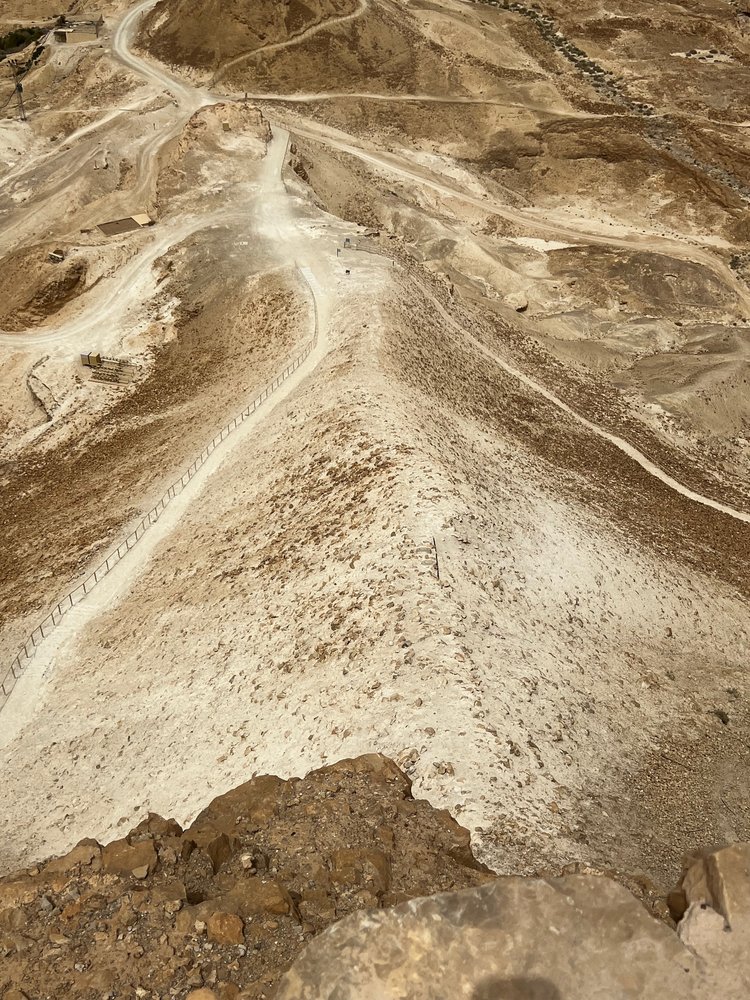 The mosaic on the floor was still vibrant in color, despite being two thousand years old.  It was epic.We spent approximately two hours on top of Masada, taking in all there was to see.  To see the quality of architecture from two thousand years ago, and to realize everything that I was seeing was either built or transported to the top of the mountain gave me a new appreciation for the resiliency of the ancient peoples who lived here.

I hadn’t planned it, but my trip took place over Orthodox Easter, Passover, and Ramadan.  The country was an interesting blend of people on holiday and those participating in the rituals of their faith.

I had designs on swimming in the Dead Sea, but the park we stopped at was packed with people on vacation, and I contented myself with getting some skin care products from the area for my daughter.

The Dead Sea is remarkable; not only is it one of the largest salt lakes in the world, it’s also the lowest point on earth.  The shoreline is caked with crusty deposits of salt from the water, which has a salinity of 34%, compared with 3.5% of most of the world’s oceans.  The sea has been receding for decades now, and the resulting sinkholes in areas formally covered by water make traversing these otherwise dry lands a risky proposition.  Tareq mentioned there are talks between the Jordanians and Israelis on preserving the sea, but little progress has been made.

From the Dead Sea, we drove about forty-five minutes north to Jericho.  Tareq was fasting in observance of Ramadan, but made sure I had the best Israeli cuisine.  In Jericho, we stopped at a fantastic restaurant; I couldn’t believe how much food they brought out for me and quickly learned two things.  Lamb is plentiful, and hummus is served at nearly every meal. 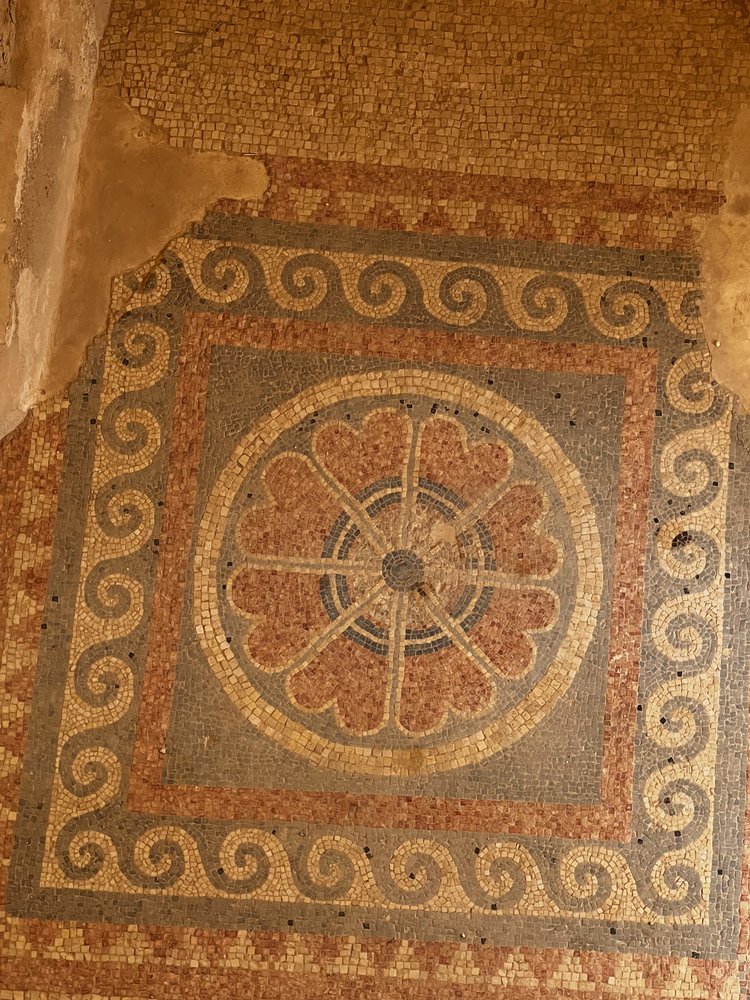 While in Jericho, we saw the sycamore tree that the tax collector

Zacchaeus climbed to get a better look at Jesus.  We also saw the Monastery of Temptation, where Jesus was tempted by the devil during his 40-day fast.  From there, after an awe-inspiring first day, we headed back to Jerusalem.

I found a great spot to eat on the outskirts of the ancient city that night, and journaled on all that I’d experienced throughout the day when I got back to my hotel.

That wraps up Day 1 of my trip to Israel.  Tareq was so knowledgeable, and my head was filled with all the information he’d shared with me over the course of the day.  I’d seen so much, and it was only the first day.

The next day promised to be even more impactful, as we planned on touring the ancient city of Jerusalem, and would see some of the most holy sites of Judaism, Christianity, and Islam.

We’ll cover that in next week’s post.  That’s all for now.  Live with courage!