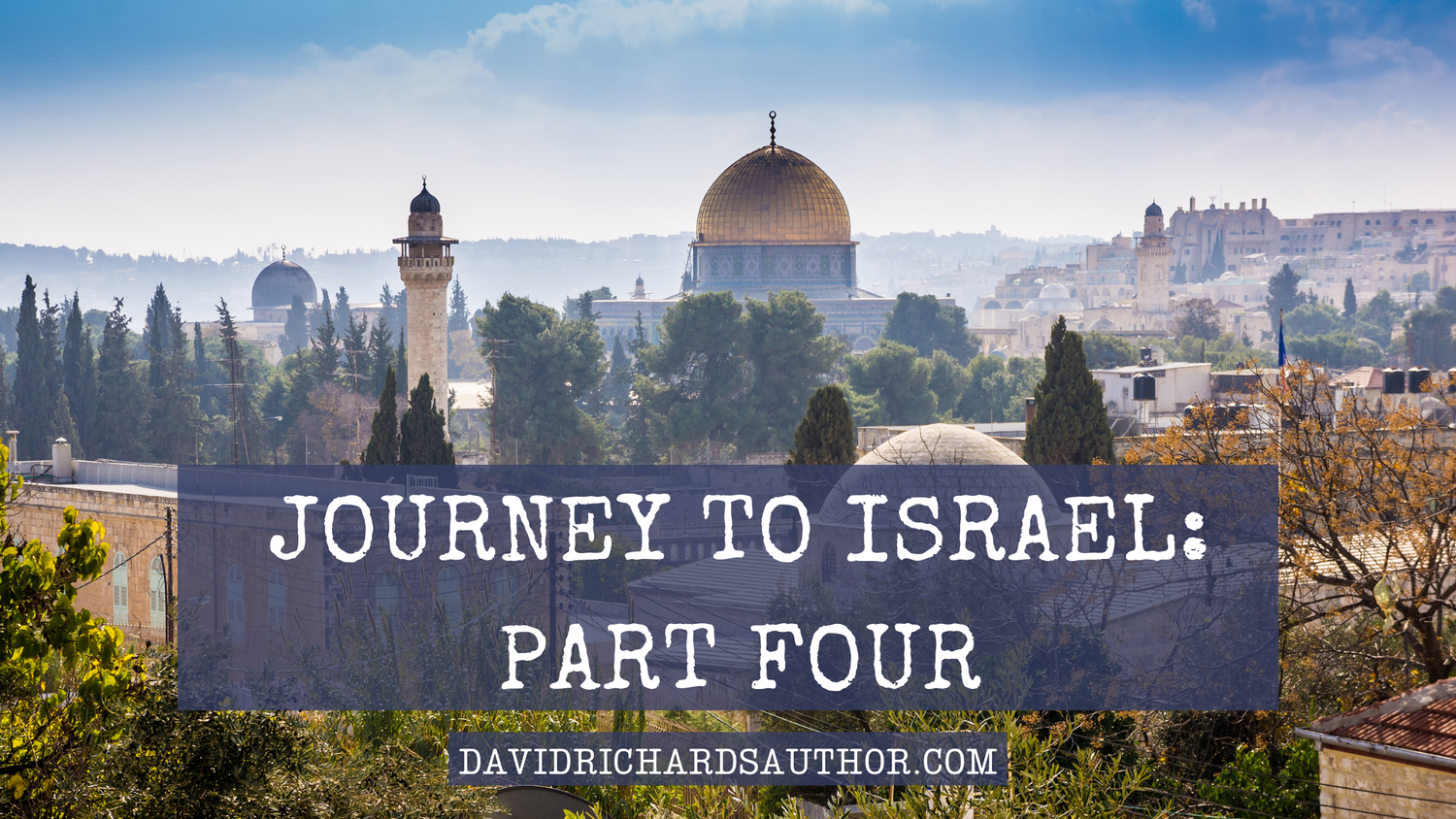 Hey everyone!  The summer is winding down and schools are starting back.  Here in North Carolina, the leaves are turning and some are already starting to fall…that usually doesn’t happen until October or November, so it promises to be an exciting autumn.  Wherever you are in the world, I hope you’re enjoying every moment.

In this post, I’m going to touch on day four of my trip to Israel, share some insights into what a magical time it is to be alive, and invite a guest blogger for our next post.  For starters, let’s return to Israel.

This was our longest day of driving, as we met early in the morning and began the trek east towards the Dead Sea and then north, to Galilee.

Temperature-wise, Jerusalem had been pleasant.  As we drove towards the Dead Sea and then headed north, it was hot.  Israel’s rainy season runs from October to April; the rest is one hot, dry summer.  It was only the end of April, but it felt like that summer was already here.

Our first stop was the Jordan River, and the spot where it’s believed that John the Baptist baptized Jesus.  The river was narrow here; on the river’s far edge, just twenty meters away, was the country of Jordan.

On the drive to Galilee, Tareq and I talked a lot.  Some of it was historical, much of it was personal.  We shared stories from our lives, places we’d traveled, and how his inspiration to teach people about his country had led him to become a tour guide, something he’d been doing for nearly five years.  I shared my reasons for coming to Israel; in part, for inspiration for my current book but also, I wanted to step back into history.

After two hours, we were nearing the city of Tiberias, located on the western shore of the Sea of Galilee.  Founded in AD 18, the city was named for the then-reigning emperor Tiberius. 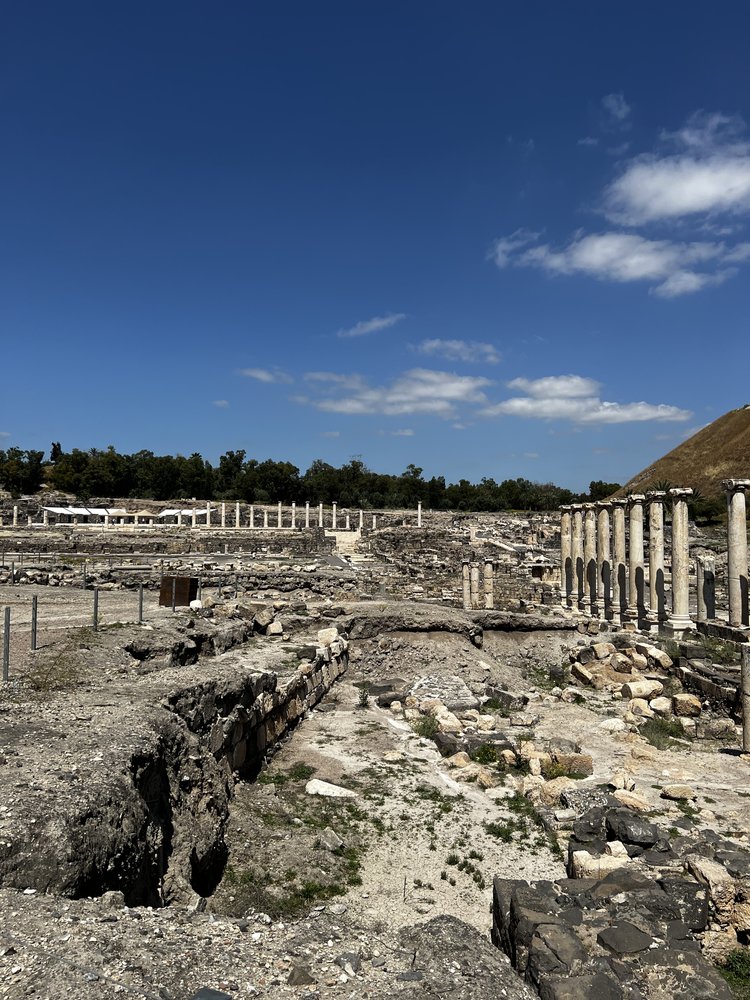 Tareq was a brilliant man. His knowledge of the country and its history was incredible; if ever we disagreed on a historical point, he would check his phone for the answer while I drove. As we came on the Sea of Galilee, he shared a beautiful moment with me when he said, “And this is the Sea of Galilee, where Jesus walked on water.” After a pause he continued saying, “It gives me chills every time I say that.”

Tiberias was modern and felt very Mediterranean, even though it was on the opposite side of the country from the Med. We drove through the city, continuing north towards the remarkable ruins of Beth She’an.

Beth She’an played a significant role throughout regional history, as it intersected the Jordan River Valley with the Jezreel Valley. In the Late Bronze Age, it served as an Egyptian administrative center. The settlement then evolved into Scythopolis during the Hellenistic period. When the city came under Roman rule, it became the leading city of the Decapolis, or league of cities on the eastern edge of the Roman empire.

In 63 BC, Pompey the Great made Judea part of the Roman empire, and the city flourished under “Pax Romana”.

By the time we arrived in Beth She’an, the sun was blazing and it was close to noon.

The expanse of the city was vast, a fact that was made even more impressive when Tareq shared that only about thirty percent of the city had been excavated. As we came up to the site, we were greeted with fluttering flags heralding the Roman rule over the city. Immediately off to our right was an enormous theater, while to our front, a long road led away from us and into the heart of Beth She’an. In the distance, the remains of the city temple sat atop the highest hill in the area. 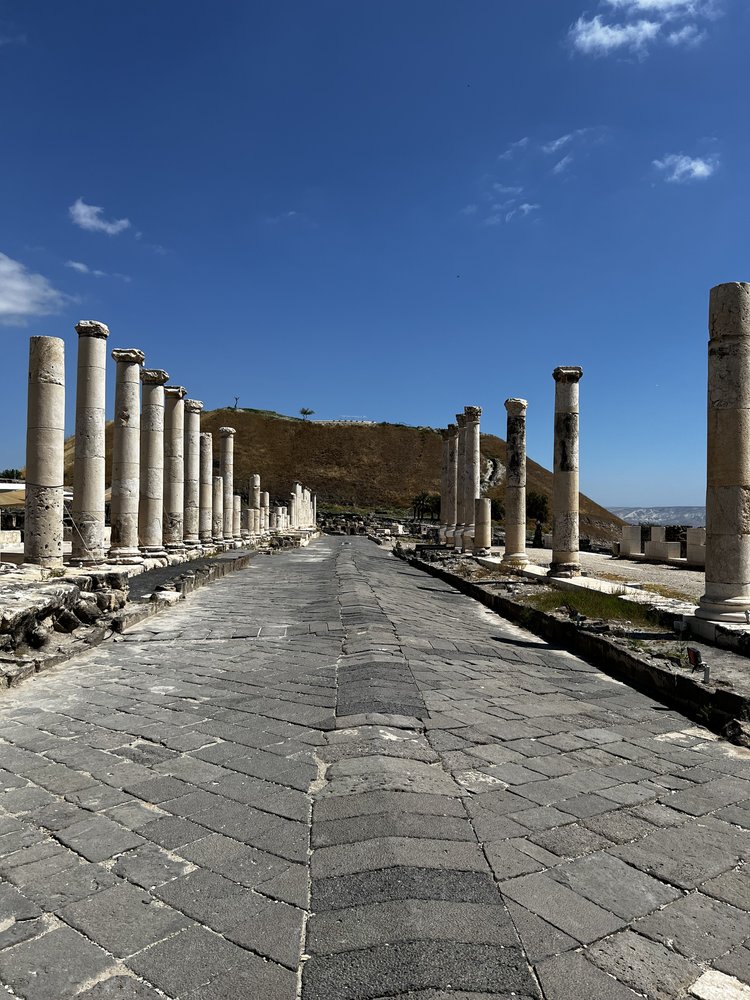 As we began walking the main thoroughfare, Tareq shared that most Roman cities had two main avenues; one that ran north and south (Cardo), the other, east and west (Decumanus).  Tareq pointed out which structures we passed that served as shops, and which were homes.  We stood in the remains of a large bathhouse, and he shared how the Romans used fire to heat the water which circulated beneath the steam rooms built alongside the baths.

In Biblical times, Beth She’an was significant in that after the deaths of King Saul and his sons, their bodies were hung on the wall of the city.

As we made our way into the heart of the ruins, Tareq shared the details of an earthquake that had struck the area during the height of the Roman empire.  We passed massive columns that had been knocked from their pedestals during the quake.  As we stood in front of one of these columns, he detailed the location of the nearest gold shop, which had been about a hundred meters from where we stood.  The archaeologists who dug the site discovered a small space with vats of mercury in it; mercury was used to purify gold.

At the toppled column directly in front of us, the remains of a man carrying a large bag of gold had been discovered.  Archaeologists were then able to piece together the story that the goldsmith had left his shop with a bag of purified gold when the earthquake struck and the column fell, killing him instantly.  It was an incredible snapshot of a moment preserved in time.

We came across the open-air toilets the Romans used, and finished our visit of the site exploring the massive theater. From there, we got back in the car and traveled to see a few more stops. 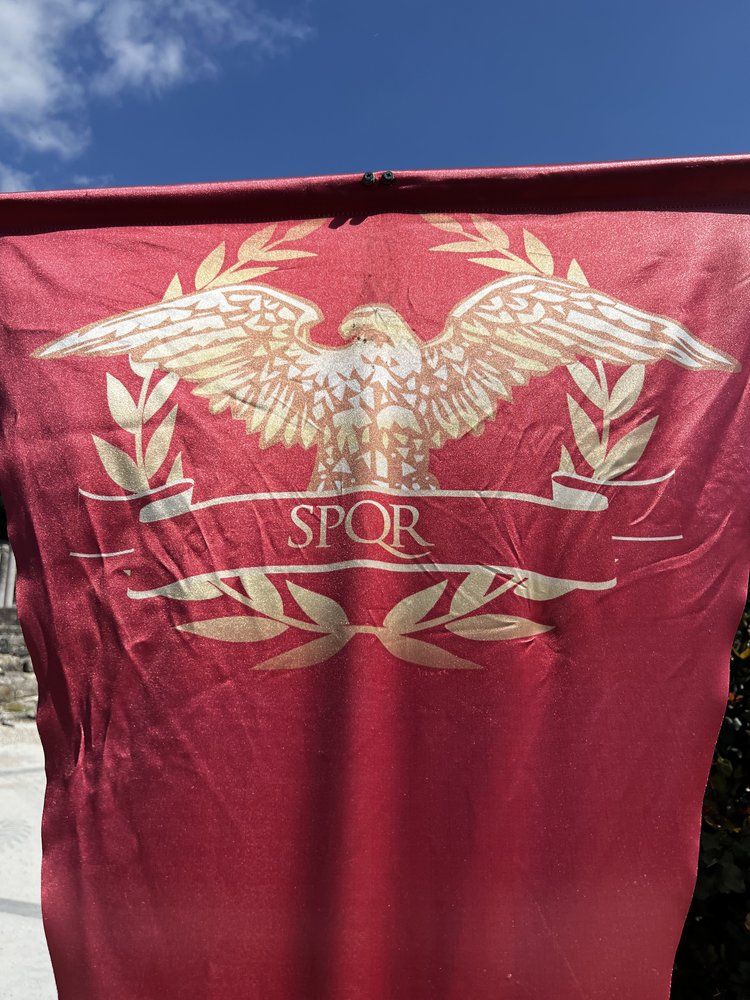 As the afternoon ended, we made our way back to Tiberias. We stayed at a boutique Airbnb on the water’s edge, and found an amazing seafood restaurant close by for dinner. While we traveled, I was glad to make it to suppertime, which afforded Tareq the chance to break his fast from Ramadan. All through our travels, and the hours spent under the heat of the Israeli sun, he kept his fast, and didn’t even drink water. If you’ve never fasted before, I highly recommend it.

Israeli meals never failed to disappoint, and our dinner in Tiberias was no exception. There was so much food on the table, there was barely enough room for our plates. After dinner, he went to check in on his family, and I took a walk along the water, reflecting on the trip so far, and appreciating everything I had a chance to see.

That’s it for day four.

As I mentioned earlier, I wanted to offer some perspective on why we live in such an incredible time. To do so, I’m going to introduce some concepts that many of you may not be familiar with; things like the Fourth Turning and the Singularity. Before I address those, allow me to put things into context. 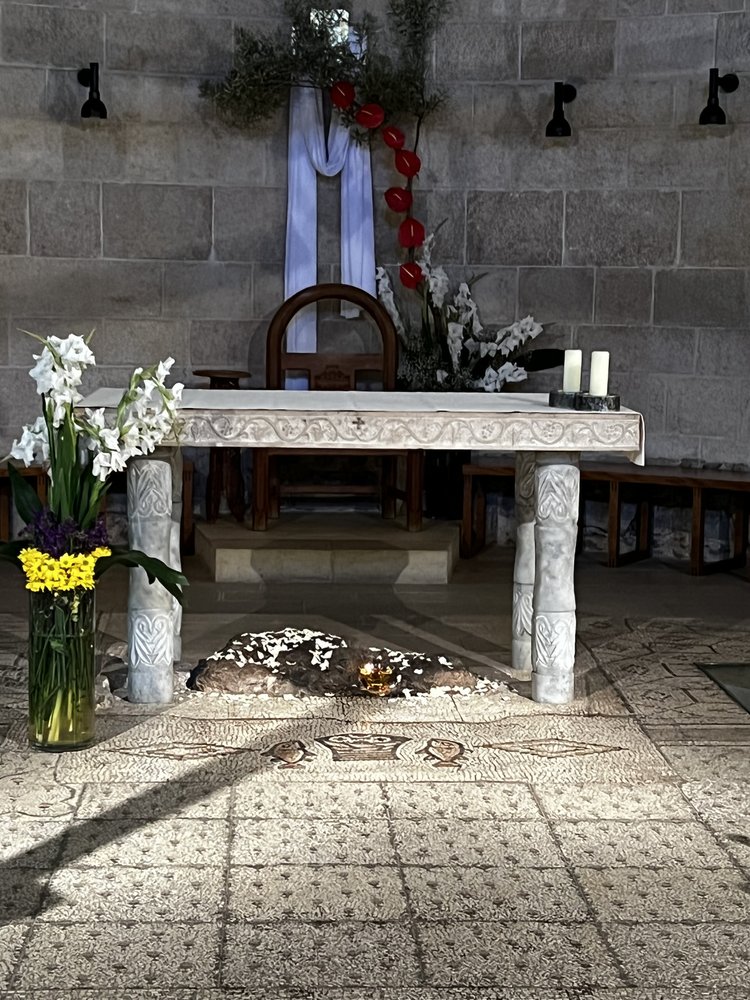 Today, billions of people are connected to the internet; estimates suggest that more than five billion people own mobile phones, and approximately three billion of the phones owned are thought to be smart phones.  Because of this, we are now more interconnected than at any time prior in human history.  While the pandemic forced us to adjust to a new way of living, it opened us up to collaborating with people from across the world like never before.  Prior to the pandemic, video meetings were a part of my regular routine at the company where I work.  Now, my eighty-year-old mom knows how to join a Zoom call.  The same is true for hundreds of millions of people, who learned to connect with one another through the internet in ways that, just three short years ago, were largely unimaginable.

Far from being the harbinger of doom portrayed in many of our Hollywood films, artificial intelligence and machine learning are accelerating our ability to make decisions in minutes that previously might have taken months, or even years.  We are on the verge of discovering customized medicine that is specific to an individual’s unique DNA signature.  Robots, like Roomba and Moxie, though in their early stages now, are the vanguards for smarter robots that will significantly transform our lives in the years ahead.  So, what does this have to do with the Fourth Turning?

The Fourth Turning is a 1997 book written by Neil Howe and William Strauss.  Without going into too much detail, history has seasons to it, and each country and the unique generations within that country have their own experiences of life, depending on the seasons in which their born.  There is turmoil, then enormous growth.  To give some context for the Americans reading this, the first turning in the United States came during our Constitutional crisis in 1787,  The nation got on track, and we elected George Washington as the nation’s first president two years later.  From there, over a series of approximately eighty-year intervals, the US went through subsequent turnings.  Roughly eighty years after the turbulence on the forming of the nation, what happened?  The Civil War; the second turning.  Eighty years after that?  World War Two; the third turning.  Eighty years after that?

The pandemic.  In 1991, Howe and Strauss predicted a crisis in 2020 that would be “the next great hinge of history”.

What I’ve shared is a dramatic over-simplification of what is discussed in the book; if you’re up for a cerebral read, this is one I’d strongly recommend.  Now then, what about the Singularity?

Ray Kurzweil is a futurist and in his landmark 2005 book, The Singularity is Near, he discusses the theory that, thanks to artificial intelligence, we will transcend our human biology.  Said differently, millions of years of evolution will, at some point, be transcended in a matter of minutes.  In this book, he predicted the singularity will happen in thirty years.  I’ll confess, I didn’t read the book in its entirety, and recently noted that just this year he released a follow-up book, The Singularity is Nearer.  I plan on reading it to see if he’s accelerated his timeline.

When taken together, these concepts suggest we are living in the most fascinating time in human history.  I’m excited to see what comes next!

In my next post, we’ll have a guest blogger, as Brad Krause has written another superb article on removing negative influences from your life to create a better version of you.

That’s it for now.  Live with courage!