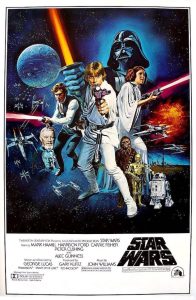 The original Star Wars franchise was the first trilogy that I remember. Way back in the 70’s, there were numerous Planet of the Apes films and seemingly an endless number of movies with either Roger Moore or Sean Connery playing James Bond, but Luke, Han, and the rest of the heroes of the rebellion were the first instance of three-part storytelling that fascinated me.

There’s something magical about trilogies. From the Lord of the Rings movies to Christian Bale’s run as Batman, trilogies extend storytelling on a grand scale; they often take years to film, and allow the audience to see characters develop with a depth that’s hard to match in solo films.

In this third post on making your life a movie, we’re going to break down the anatomy of what turning your life into a movie looks like.  These are practical steps you can take to start living like you’re in a movie; much of it comes down to how you view the world.  I’ll explain more shortly.  To start things off, as promised last week, let’s dive into the Heroine’s journey.  You should see some similarities between her journey and Joseph Campbell’s Hero’s journey.  You’ll also see some distinct variations. 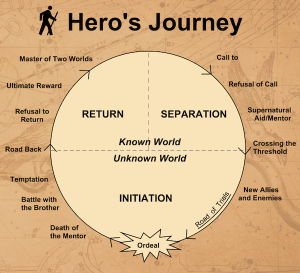 By step four, the heroine experiences all the anxiety and fear associated with giving up on their old way of being, and may experience shame in their new identity.  In the Eye of the Storm, step five, the heroine’s mood is buoyed by a brief period of success; this doesn’t last however, and the heroine finds challenge from those around her, who may refuse to be led by a woman. Step six brings about the reckoning, as the heroine realizes her previous coping mechanism were ineffective, or that she needs to keep fighting at an unsustainable level to maintain respect.  Despite all they have done, they fail, accepting defeat in the process.

By step seven, the heroine has met someone, aka the mentor, who offers support.  The heroine embraces the feminine aspects of this support, and accepts their own lack of self-sufficiency.  The heroine awakens in step eight, thanks in part to the support received, and sees the world and their place in it differently.  Finally, in step nine, the heroine sees the world for what it is, and uses their experience to empower others to change as well.  The reward the heroine receives is spiritual and internal.  As I searched for relevant examples of the heroine’s journey in film, I came across a surprising one: Captain America. 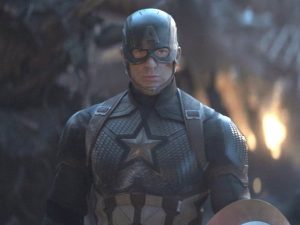 I’m providing a link to an excellent article here, written by Katerina Daley back in 2018.  For those of you not interested in reading it through to its conclusion, Daley brilliantly highlights the second Captain America movie The Winter Soldier, as a shining example of the heroine’s journey played out in film.  She shows the shield-carrying hero’s Illusion of the Perfect World, and how the rest of the story arc follows through the remaining eight steps.

I’m highlighting the hero and heroine’s journeys to show you there are multiple ways to understand your own life story, and which journey makes more sense for you.  The point of Daley’s article is to underscore the fact that you don’t have to be a man to go on the hero’s journey, nor do you have to be a woman to undertake the heroine’s journey.  So, how does this apply to living your life like you’re in a movie?

In the paragraphs that follow, I’m going to break down for you the four key steps to turning your life into a movie.  The first of these aligns very closely to the Illusion of the Real World as highlighted in step one of the heroine’s journey.

Here in the United States, we love duality.  That makes sense…we live in a democracy after all.  Fittingly, Google provides two definitions of duality: 1) the quality or condition of being dual, and 2) an instance of opposition or contrast between two concepts or two aspects of something; a dualism.  In the US, the second definition is what really applies.  Americans love their teams, and love to hate the opposition.  Politics, college sports, professional sports…take your pick; Republicans/Democrats, Yankees/Red Sox, Duke/North Carolina…America is full of duality.  What makes these rivalries so great is the fact that they exist.

What would the Yankees be without the Red Sox?  If we didn’t have two viable political parties, what kind of government would we have and, while I didn’t attend either school, I love the fact that one of college basketball’s greatest rivalries is in my own backyard.  What makes these rivalries great is their duality.  What makes these rivalries special is the continual growth each demands from both parties involved.

The point here is, we must appreciate the whole, and not just the individual parts.  That means setting aside our biases or preferences, and accepting the world the way it is. 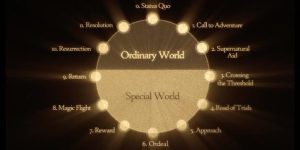 You can’t paint anything interesting if your palette only has one color, and the world is too complex to be seen as black and white.  Look at nature; nature loves diversity.  Love the variety of the human experience; see and accept the world the way it is.  That leads us to step two.

2. See the world better than it is.

We all want a compelling future.  To turn our lives into a movie that people are going to want to support and watch, we must offer a vision of the world better than it is today,

I’ll be honest, when I first started working on my third book, when I really started giving it some attention and focus, I was focused on what it would mean for me.  Early in my writing, I had a keen sense of what was at the heart of the story, and was thrilled at the possibilities of how this story might impact my life.  As the creative process kicked in however, and I started to appreciate the depth of the story, I began to appreciate what it might mean for others.  That was when the shift occurred.  How could I use this story to offer people a compelling future, one that not only excited them, but that also felt achievable?  That shift in my thinking transformed my writing process.

That was a three-year journey.  I’ve never given anything in my life the level of attention and dedication for such a sustained amount of time as I did writing this next book but, as I mentioned last week, turning your life into a movie takes everything you’ve got.

There is an abundance of untapped imagination on this planet.  Imagination isn’t reserved for the rich or the educated, nor is it the exclusive domain of the entertainment industry.  Imagination at play is what we see whenever we see a kid who’s more enthralled by the box their Christmas present came in rather than the present itself.  What is your version of a better world?  What can you imagine?

3. Have the courage to see that better world realized.

Simply put, take action towards the version of the world you wish to see. When I was in the Marines, I’d all but given up on becoming an author. It certainly didn’t fit in with the military lifestyle, and I gave it little attention as a result. But my desire, my passion for being a writer never went away. When I started writing poetry again ten years into my military career, I felt strangely out of place and yet oddly at home. Only one other Marine officer I knew had an artistic talent that they openly shared.

Eleven years after stepping out of uniform, I had written hundreds of pages of failed horror stories in a desperate effort to make my dream a reality.  When I shifted away from horror to personal development, I was disillusioned and excited; disillusioned because I had poured so much time and energy into a genre I felt comfortable in.  Excited, because I knew the motivation I had was going to propel me across the finish line of becoming a published author.

In two years, I wrote two books, each just under two hundred pages in length.  Over the past three years, I worked on this book before finally finishing the second draft in August of this year.  Four hundred pages.

If we want to change the world, we must change ourselves.  Seeing a better world means being the change we want to see.  That only happens by doing the internal work and overcoming our limiting beliefs, which leads us to our fourth and final step.

I believe we are all guided by a single belief, one that is distinct and unique for each of us.  This belief guides our decision-making and shapes our values.

Unfortunately, for many of us, we get caught up in our stories.  Life has a way of placing obstacles along our path.  When those obstacles take the shape of problems, and we suffer setbacks, fear sets in.  The two greatest fears we all have are the fear of not being enough and the fear we won’t be loved.

Fear steers us off course, and we get focused on survival and being comfortable.  We lose sight of our true north.  But life is meant to be an adventure.  Finding that true north again takes courage, it is a test of mettle, of resolve and will.  Ultimately, like the heroine, we must test that belief until we find it flawed, or until it is found to be true.

That is the hero/heroine’s journey.

Next week, I’m going to take this series a step further by sharing how I began the journey of living like I’m in a movie.  For now, I’ll leave you with the brilliant words of Dylan Thomas:

Do not go gentle into that good night,
Old age should burn and rave at close of day;
Rage, rage against the dying of the light